During a recent visit with my wife to Square Books in Oxford, Mississippi, I noticed this little book while sipping coffee and perusing the shelves. Having had no intention of purchasing anything on this trip, I was nevertheless intrigued by the book’s subject. As I mentioned in a previous post, I have entertained an “on again-off again” interest in the War Between the States, and few figures from that conflict are as polarizing as that of Nathan Bedford Forrest (1821-1877). Having amassed a sizeable fortune as a slave trader in the prewar years, Forrest quickly rose through the ranks of the Confederate Army, entering as an inexperienced private yet ending the war with the rank of lieutenant general. A man of fiery temper and given to gambling and swearing, his career in the slave trade and brief—and overblown in popular history—association with the Ku Klux Klan have led to Forrest’s enduring reputation as an emblem of everything that was wrong with the antebellum South. While this reputation was undoubtedly earned, evidently it results from an incomplete picture of Forrest’s life and legacy. 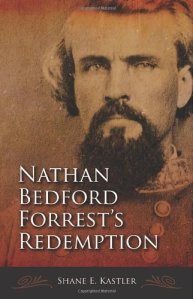 What intrigued me about this book was the word “Redemption” in the title. Is “that Devil Forrest,” as William Tecumseh Sherman (1820-1891) called him, a man that is in any way “redeemable?” (Is Sherman, for that matter?!?) Is there anything about Forrest’s life and character that should lead us to reevaluate him? According to author Shane Kastler, there is. In Nathan Bedford Forrest’s Redemption, Kastler takes a broad and largely sympathetic look at Forrest’s life, but without excusing his flaws, which were many. Forrest is rightly held up as a military genius (especially considering his lack of formal training), and is presented as a character with many admirable traits, including being a good provider and industrious worker, a chivalrous defender of women, and a respecter of the Christian faith. Still, for most of his life Forrest’s relationship to Christianity was distant and personally unbelieving, the religion of a man content to let his wife and mother to “do his praying for him.” In 1875, as a prematurely-aged and feeble Forrest had “hit rock-bottom,” this changed.

Though Forrest had amassed considerable wealth prior to the war, he spent practically all of it personally raising and supplying his cavalry units. After the war, his professional career was marked by a string of failures in agriculture, insurance, and the railroad industry. Far from being personally wealthy, Forrest was a relatively poor man in his declining years. By 1875, Forrest had begun to take stock of his life, and found what he saw wanting. In November of that year, he heard a sermon by Rev. George T. Stainback on the following text from Matthew 7:

Believing himself to be the man “which built his house upon the sand,” Forrest repented of his sin and confessed Jesus Christ as Lord and Savior, and joined the First Cumberland Presbyterian Church in Memphis. For the remainder of his life, the rough, tempestuous, foul-mouthed, gambling racist that was Nathan Bedford Forrest gradually gave way to a man of a gentler demeanor (though with occasional “lapses”). Perhaps most astounding was Forrest’s change in matters of race even in the months leading to his conversion, which is demonstrated in the following words spoken before a black civil rights group, the Independent Order of Pole-Bearers Association:

Ladies and Gentlemen, I accept the flowers as a memento of reconciliation between the white and colored races of the Southern states. I accept it more particularly as it comes from a colored lady, for if there is any one on God’s earth who loves the ladies I believe it is myself.

I came here with the jeers of some white people, who think that I am doing wrong. I believe I can exert some influence, and do much to assist the people in strengthening fraternal relations, and shall do all in my power to elevate every man, to depress none.I want to elevate you to take positions in law offices, in stores, on farms, and wherever you are capable of going. I have not said anything about politics today. I don’t propose to say anything about politics. You have a right to elect whom you please; vote for the man you think best, and I think, when that is done, you and I are freemen. Do as you consider right and honest in electing men for office.

I did not come here to make you a long speech, although invited to do so by you. I am not much of a speaker, and my business prevented me from preparing myself. I came to meet you as friends, and welcome you to the white people. I want you to come nearer to us. When I can serve you I will do so. We have but one flag, one country; let us stand together. We may differ in color, but not in sentiment.

Many things have been said about me which are wrong, and which white and black persons here, who stood by me through the war, can contradict. Go to work, be industrious, live honestly and act truly, and when you are oppressed I’ll come to your relief. I thank you, ladies and gentlemen, for this opportunity you have afforded me to be with you, and to assure you that I am with you in heart and in hand. (145)

“That Devil Forrest,” the racist, slave-trader, and Klansman, ended his life with a far better view of racial equality and reconciliation than even most “respectable” white men had in his day. More importantly, he died reconciled to his Maker, having exercised saving faith in Christ.

To speak briefly about the book itself rather than just its subject matter, it is clear that Kastler is a pastor by training rather than an academic historian. The book contains fewer footnotes than one might want if checking of sources is desired. Additionally, the author has, from one perspective, some difficulty staying “on point.” Whenever relating an event from Forrest’s life that might be viewed as having redemptive significance from a Christian perspective Kastler indulges in a brief discussion of the theological implications of that event, bringing in examples from Scripture or from church history. Of course, one might argue that Kastler’s purpose in writing the book is as much evangelistic as it is historical, and in that regard these asides function as something of an extended “gospel tract.” Although this evaluation might sound a little confused, I found them to be simultaneously distracting and wonderful. Theologically Kastler is clearly Calvinistic; at times his writing bears the marks of the experience of Calvinistic Southern Baptist pastors and theologians that take special pains to demonstrate that their view of God’s sovereignty is both biblical and evangelistic.

This view of the absolute sovereignty and overruling providence of God permeates the book, with Kastler demonstrating to the reader how God moved slowly but surely in events and relationships to draw Nathan Bedford Forest to Himself. The book, like Forrest’s life itself, is a testimony to the power and mercy of our forgiving and redeeming God, the God whose grace, as wrote a more famous Baptist pastor, abounds even to the chief of sinners.

Micah Everett is Associate Professor of Music (Trombone/Low Brass) at the University of Mississippi, Principal Trombonist of the North Mississippi Symphony Orchestra, Interim Music Director at College Hill Presbyterian Church, Assistant Editor (Audio/Video Reviews) for the International Trombone Association Journal, and an S.E. Shires trombone artist. He is the author of THE LOW BRASS PLAYER'S GUIDE TO DOUBLING, published by Mountain Peak Music, and released two solo recordings, STEPPING STONES FOR BASS TROMBONE, VOLS. 1 and 2, on the Potenza Music label in 2015 and 2022, respectively. In addition to his professional work, he maintains an avid interest in the study of the Bible and of Reformed theology. He holds doctoral and master's degrees in music from the University of North Carolina at Greensboro, a bachelor's degree in music education from Delta State University, and a certificate in systematic theology from Puritan Reformed Theological Seminary.
View all posts by Micah Everett →
This entry was posted in Bible, Calvinism, Civil War, Evangelism, History, Nathan Bedford Forrest, Predestination, Providence, Redemption, Salvation, Theology. Bookmark the permalink.
Loading Comments...
%d bloggers like this: