Reflections on This Week’s Recording Sessions

Playing for my most important audience for the week: the ribbon mic directly in front of me.
Photo by Sara Lowrey.

Yesterday afternoon I completed three days of recording for a CD of music for solo bass trombone and piano, a project about which I have already shared some details in a previous post. While there is still much to be done to bring this project to fruition, I wanted to share a few reflections about this week’s experience. While I have been involved in ensemble recordings of various kinds, this was my first experience with recording as a soloist. Thus, while some aspects of this process were familiar, there were plenty of surprises, as well.

Things that were as I expected.

Things that were NOT as I expected.

Things for which I am particularly thankful.

What I have learned, and what I will do differently next time.

What has to happen before this CD is made available for purchase?

As you can see, it was a lengthy process to get to this week, then a week of grueling but satisfying recording sessions, and there is still quite a bit to do before the project is completed. Although I hope to get to a CD release as soon as possible, realistically I do not expect to see it happen before the first of next year. If it is sooner than that, great! If later, that’s fine, as well. In any case, this has been a challenging but enjoyable undertaking, and I am looking forward to seeing the final result.

But first…a break—from the recording project, from intense practicing (though not all practicing), and from blogging. Look for the next new post on Friday, August 30. 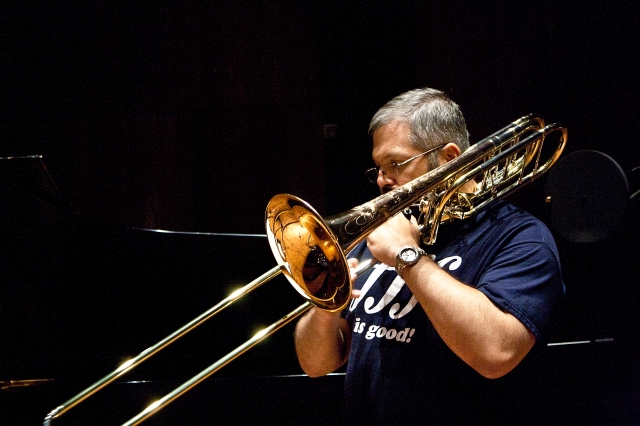 Here’s a good view of the fine bell engraving on my S.E. Shires bass trombone.
Photo by Sara Lowrey.

Micah Everett is Associate Professor of Music (Trombone/Low Brass) at the University of Mississippi, Principal Trombonist of the North Mississippi Symphony Orchestra, Tubist/Bass Trombonist of the Mississippi Brass Quintet, Bass Trombonist of the Great River Trombone Quartet, Assistant Editor (Audio/Video Reviews) for the International Trombone Association Journal, and an S.E. Shires trombone artist. He is the author of THE LOW BRASS PLAYER'S GUIDE TO DOUBLING, published by Mountain Peak Music, and released his first solo recording, STEPPING STONES FOR BASS TROMBONE, VOL. 1, on the Potenza Music label in 2015. In addition to his professional work, he maintains an avid interest in the study of the Bible and of Reformed theology. He holds doctoral and master's degrees in music from the University of North Carolina at Greensboro, a bachelor's degree in music education from Delta State University, and a certificate in systematic theology from Puritan Reformed Theological Seminary. The ideas and opinions expressed here are not necessarily shared by the employers and organizations with which the author is associated.
View all posts by Micah Everett →
This entry was posted in Bass Trombone, Low Brass Resources, Music, Recordings, Trombone. Bookmark the permalink.
Loading Comments...
%d bloggers like this: