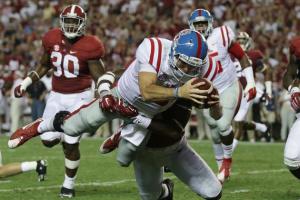 Last night was a long and exciting one in the Everett household, as it was for many Ole Miss fans. After an unlikely win against the Alabama Crimson Tide during last year’s football matchup between the two teams in Oxford, many of us had some hope for this year’s game…but not much. After all, the Rebels had only once beaten Alabama in a game at Bryant-Denny Stadium, and had never beaten the Tide in football in two consecutive years. Nevertheless, given the Rebels’ early season performances (granted, against “cupcake” opponents), there was at least a bit of wondering if this year’s game might bring a second win against Alabama on their home turf. As the reader no doubt knows by now, that is exactly what happened, with the Rebels emerging with a hard-fought 43-37 victory. It was an exciting night, and this morning’s alarm and my scheduled speaking on behalf of The Gideons International at a church in Grenada seemed very early, indeed.

When we first moved back to Mississippi three years ago for me to begin teaching at The University of Mississippi a few of my friends and colleagues from elsewhere remarked—not always happily—that I had quickly begun to express more dedication to my new employer’s sports teams than I had to those associated with my previous schools. There is some validity to that observation, and not just because Southeastern Conference athletics are arguably more exciting than those found in smaller conferences and lower divisions. While I am not an Ole Miss alumnus, both of my parents are, so I was raised as an Ole Miss fan. Moreover, because my undergraduate alma mater is a Division II school, my fellow students and I tended to retain our Division I loyalties, since cheering for both schools did not invite conflicts of interest. Thus my “newfound” interest in Ole Miss athletics was not so new after all; it was really more like slipping into a comfortable pair of old shoes.

All of that to say, as I write this evening I do so not as an aloof faculty member who is disinterested in intercollegiate athletics. I very much enjoy a good game, and even more so when my university is well-represented. These five reflections are not intended to praise or criticize intercollegiate athletics in any fulsome way, but are simply some things, both positive and negative, that I have been pondering for a while, and which were brought to mind again last night after last night’s exciting game.

1. Intercollegiate athletics can engender a certain institutional pride which is very healthy.

While I am sometimes annoyed by our campus being taken over by the crowds for home football games (and occasionally baseball or basketball, but not to the same extent), I am glad that so many people love our university. My students are, on the whole, proud to be at Ole Miss, and this is reflected in their attitudes and even their attire. To those who have never known a different situation, the presence of such school spirit no doubt seems normative, but such is not the case everywhere. I loved teaching at the University of Louisiana at Monroe, where I was on the music faculty for seven years, but it was always disheartening to see students and others show up for athletic events wearing LSU colors and logos rather than ULM ones. While Ole Miss’s athletic teams are not always the greatest, our students, alumni, and at least some of the faculty unite around them in a way that is healthy and encouraging, and with a pride in the university that extends to other (and arguably more important) endeavors.

2. Intercollegiate athletics are a great aid to marketing and recruitment.

This is a no-brainer, of course. While a few students develop impressions and decide upon a particular university because of the academic or library facilities, a certain professor’s work, performing groups of various kinds, or other means of outreach and recruitment, athletic teams provide the most readily accessible public face of a university. When these teams are successful, the entire university’s image improves in the eyes of many prospective students. In the South, this is particularly true when it comes to football, and the various “number crunchers” at Ole Miss have demonstrated links between success in football—and even particular football games—and new student applications to the university.

3. Intercollegiate athletics enable some students to attend and succeed in college who might not be able to otherwise.

The popular image of college athletes being poor students has some basis in fact, though the caricature is by no means universally applicable. Plenty of students use the opportunities afforded to them by athletic scholarships and the various support services offered to student-athletes to seriously pursue degrees and, ultimately, careers. I can attest from personal experience that athletes are sometimes among the most respectful and engaged students in a course, and professors can tell when a team’s coaching staff demands that students strive for success both academically and athletically. I remember well the baseball players in my music appreciation classes at the University of Northern Iowa, now over a decade ago. Those young men were not always the most interested in the subject matter, but they were always well-prepared, polite, and respectful, and came to me well in advance of any absences made necessary by their playing schedule to request assignments and even early testing. That *all* of the baseball players in my classes were like this led me to believe that their coach demanded such excellence from them, and I’m sure other faculty members appreciated this as much as I did.

4.  Like it or not, many university music departments owe their size and funding—if not their existence—to athletic bands.

And now for a bit of realism. Almost every year an older student comes to me asking me why he has to be in the marching band to retain most or all of his band scholarship. The usual student in this situation has marched in college band for three years or more and would rather have that time available for additional practice or study, and perhaps even laments the negative effects of marching band on the embouchure (effects which, I should add, are not inherent to marching music but almost inevitably happen when playing in a loud and excited manner, such as when playing in the stands). Happily, I have no knowledge or say-so when it comes to scholarship amounts, so I am not forced into any sort of uncomfortable confrontation with students in this matter. Still, I take these opportunities to remind students that many of those that donate to our scholarship fund don’t care about wind ensemble, or orchestra, or choir, or trombone ensemble, or anything that we do except athletic bands. “He who pays the piper calls the tune,” as they say, and those donating funds for music scholarships want to see a big marching band on Saturdays. Period. I would even wager that, if bands ceased to be a part of intercollegiate athletic events, institutional and alumni support for music scholarships would decline considerably. If bands ceased to be a part of athletic events at the secondary school level, the jobs for which we most often prepare students might disappear as well, and thus the perceived need for university music departments. Of course, I wish that the public generally would have more awareness of and interest in the many and varied offerings of our music department and those at other schools, but realism demands that I acknowledge the central place of athletic bands in the public perception of our work. If I only had a dollar for every time I hear someone ask “So you work with the band?”

5. The tendency of burgeoning athletic departments to overshadow universities’ academic missions should be checked.

As you can see, I believe that intercollegiate athletics occupy an important place in the life of the university. Strategically, I think they are vital to the continued existence of music departments as we know them, and the central role of athletics in marketing the university and engendering pride in the institution is easily demonstrated. My only concern is that intercollegiate athletics has grown into a big business, at least at larger institutions, and the amounts of money being generated by, donated to, and invested in athletic endeavors, facilities, and personnel dwarf the budgets of most academic departments. For example, based on my loose estimate of the salaries in my department (I don’t actually know what my colleagues make) and public reports regarding the salary of coach Hugh Freeze, the annual salary of the head football coach at Ole Miss is enough to pay the salaries of the entire Ole Miss music department for over two years! And that’s just one man. Am I begrudging him that? Not at all; success in football generates more than enough investment to justify that salary from a purely economic perspective, and I think our coach is a fine gentleman who genuinely loves and cares for his players. As our universities get bigger and have more alumni and supporters, the increasing size of athletic departments is perhaps inevitable, but that doesn’t mean this is an altogether positive development. In such an environment, questions such as whether student-athletes should receive compensation for their efforts (beyond tuition, room, and board) become significant, and I do not pretend to have an answer to such issues. As a faculty member who loves intercollegiate athletics and believes them to be an important part of university life, I simply fear that the bigger athletics become, the more distorted their relationship to the rest of the university will become. I’m not sure what the solution is, or if there even is one.

For now, I’ll just keep reveling in last night’s great win, and perhaps continue to dish out a bit of good-natured “trash talk” to my friends and colleagues among Alabama’s faculty and alumni.

Micah Everett is Associate Professor of Music (Trombone/Low Brass) at the University of Mississippi, Principal Trombonist of the North Mississippi Symphony Orchestra, Tubist/Bass Trombonist of the Mississippi Brass Quintet, Bass Trombonist of the Great River Trombone Quartet, Assistant Editor (Audio/Video Reviews) for the International Trombone Association Journal, and an S.E. Shires trombone artist. He is the author of THE LOW BRASS PLAYER'S GUIDE TO DOUBLING, published by Mountain Peak Music, and released his first solo recording, STEPPING STONES FOR BASS TROMBONE, VOL. 1, on the Potenza Music label in 2015. In addition to his professional work, he maintains an avid interest in the study of the Bible and of Reformed theology. He holds doctoral and master's degrees in music from the University of North Carolina at Greensboro, a bachelor's degree in music education from Delta State University, and a certificate in systematic theology from Puritan Reformed Theological Seminary. The ideas and opinions expressed here are not necessarily shared by the employers and organizations with which the author is associated.
View all posts by Micah Everett →
This entry was posted in Higher Education, Intercollegiate Athletics, University of Mississippi. Bookmark the permalink.
%d bloggers like this: