On Demanding Excellence in Music: Brief Reflections on Two Teachers

Most music students—actually, probably most students in every field, but my experience is limited—will deliver excellence only when it is demanded of them. I don’t think it is stretching the meaning of Scripture too far to say that this is a result of the Fall. According to Genesis, work itself did not enter the world because of sin, but unproductive work did, whether or not man is immediately responsible for the lack of productivity in a particular instance. Moreover, if God said to do everything “heartily,” then to give any lesser effort is necessarily sin.

I actually don’t intend for this post to be peculiarly Christian in its orientation, but since that is the worldview with which I approach every subject, it undergirds my thinking here as well. Suffice it to say that if sin is a universal human condition as the Bible says it is, and if slothfulness is a part of that sinful condition, then our tendency as human beings is to be lazy, to give less than maximum effort. Precious few individuals seem to be blessed with the ability to find motivation from within to overcome this innate tendency toward sloth. In music those most gifted in this way tend to become the leading professionals, as I’m sure is true in other fields. Good teachers recognize these individuals early, and basically funnel increasingly complex assignments to those students while focusing their energies upon the bulk of their students, the “middle 85% or so” who are capable of achieving great things musically, but must be motivated from without to do so, to overcome the tendency toward sloth. My own behaviors as a teacher in the past couple of weeks have led me to reflect on a couple of teachers who demonstrated to me how to do this. 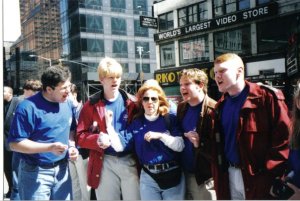 What’s the matter? You can’t imagine me with that much dark hair, without a beard, in a group randomly singing to our teacher on a New York City sidewalk?
I had dark hair and no beard in 1996. It was cool back then.

The first is Donna McCommon, who was the choral director at Pearl High School when I was a student there. While I had started band in the sixth grade, I did not participate in the choir program until I was a junior in high school. The year before I had discovered that I had “perfect” pitch (or, rather, discovered that others could not identify or produce pitches on demand as I could—that’s a long story itself). This quickly came to the attention of Mrs. McCommon, who insisted (actually, demanded…or maybe threatened) that I join the choir the next year. While I have never been a particularly good solo singer, because of my sense of pitch I was quickly able to win positions in the more selective chamber group and barbershop quartet at the school, and even received a small scholarship to continue singing in college. It was a good experience for me.

One thing I noticed very quickly about Mrs. McCommon’s teaching is that she expected her more advanced students to do a lot of independent work. Students in the chamber singers worked mostly on singing madrigals during the regular rehearsal time during the school day, but were also expected to sing in the large mixed choir and the appropriate men’s or women’s chorus. Those pieces received relatively little work during the chamber singers’ class time; we were given those pieces and simply expected to learn them. Quartet rehearsals were almost exclusively outside of the school day, often late at night at one of our homes. All of this was very different from my experience with band, where we received all of the music for performance well in advance and all performance pieces were regularly rehearsed. While we did some solo and chamber music and had a jazz band that only met once weekly, I don’t recall ever receiving a piece of music in the band program with the instruction to basically “go learn this.”

While I was initially put off by this aspect of the choral program, in the intervening twenty years I have come to appreciate it more and more. As I work with my students at the university level and try to get them—individually and collectively—to strive for greater and greater levels of excellence, my ability to micromanage every aspect of their musical development lessens. This level of independence should be expected when working with college music majors, most of whom will become teachers themselves in very short order, but my tendency is always toward trying to retain too much control—and to shoulder too much responsibility. Mrs. McCommon taught me that if you demand high levels of achievement and independence from students, they will deliver, a truth confirmed by my own experience. If you ask little, you will get it. If you demand much, you will get that. So, demand much.

My band director at Delta State University was Ken Lewis. Mr. Lewis had been a very successful Mississippi high school band director, and his experience in that realm gave him keen insights which his students have found very useful. Many of my fellow students from DSU are now successful band directors themselves, and even as an applied music teacher I find myself borrowing and reapplying a number of concepts from Mr. Lewis’s classes on how to run a successful band program.

Mr. Lewis liked to cultivate something of a country boy/tough guy image on the podium—imagine if for some reason The Highwaymen brought on a fifth member who was a band director. There might have been a very tiny bit of “shtick” in that self-presentation, but Mr. Lewis really was and is a country boy, and I say that with no disrespect intended. In fact, I admired then and now his ability to create homespun sayings to effectively communicate advanced musical concepts to Mississippi students. Some of these I’ve stolen—students who think the saying “Don’t sound like Conway Twitty—he’s dead!” originated with me are greatly mistaken, even though I used it enough at one point to inspire a couple of students to purchase a Conway Twitty record for me at a garage sale. That record is now framed and hanging in my office, so I rarely use the saying anymore—I just point at the record to make my point.

Often when working with us and demanding ever greater levels of perfection on a piece of music Mr. Lewis would declare that “I’ll be satisfied when I’m six feet under!” Imagine Johnny Cash saying that sentence and you’ll get a hint as to the delivery. In reality, what he was giving us was a “tough guy” way of saying “‘Good enough’ doesn’t exist, and I’m going to keep on demanding greater and greater music making until the end.” In my own career I’ve realized that this attitude is necessary for continued achievement. I can think back to a couple of times when, for whatever reason, I became satisfied with my level of playing or teaching and began to lower my intensity a bit. Declines in my skills predictably followed. You really are getting better or getting worse as a musician at all times, and being somehow “perpetually unsatisfied” is necessary for continued growth. Likewise, I continually admonish students to keep demanding better and better playing of themselves. Most will tell you that they rarely hear an unqualified “good job” from me in lessons!

Successful music teachers always demand more and better work from their students, and don’t consider “good enough” to be an achievable goal. Those are lessons I learned not from the low brass players and teachers I usually discuss on this blog, but from my high school choir director and college band director. I am thankful for them and for their influence on my life and work.

Micah Everett is Associate Professor of Music (Trombone/Low Brass) at the University of Mississippi, Principal Trombonist of the North Mississippi Symphony Orchestra, Tubist/Bass Trombonist of the Mississippi Brass Quintet, Bass Trombonist of the Great River Trombone Quartet, Assistant Editor (Audio/Video Reviews) for the International Trombone Association Journal, and an S.E. Shires trombone artist. He is the author of THE LOW BRASS PLAYER'S GUIDE TO DOUBLING, published by Mountain Peak Music, and released his first solo recording, STEPPING STONES FOR BASS TROMBONE, VOL. 1, on the Potenza Music label in 2015. In addition to his professional work, he maintains an avid interest in the study of the Bible and of Reformed theology. He holds doctoral and master's degrees in music from the University of North Carolina at Greensboro, a bachelor's degree in music education from Delta State University, and a certificate in systematic theology from Puritan Reformed Theological Seminary. The ideas and opinions expressed here are not necessarily shared by the employers and organizations with which the author is associated.
View all posts by Micah Everett →
This entry was posted in Music, Music Education, Teachers, Teaching Low Brass. Bookmark the permalink.
%d bloggers like this: