Book Review: A Hobbit, A Wardrobe, and A Great War by Joseph Loconte

Reading is one of my favorite pastimes, and while I am unable to devote the time to books that I would like during the academic year (at least, to books beyond my immediate academic area), summers are a time when I can on some days spend the better part of an afternoon in a chair enjoying works on a number of subjects. Unlike some university faculty members who seem to take great pains to spend as much time far away from campus as possible during the summer, I prefer to remain at home for most of that time. Besides, Oxford is a great place during the summer. It has all of the dining establishments and other amenities that only the presence of thousands of students and tens of thousands of sports fans can bring to a small town, but with a fraction of the traffic and practically no lines anywhere. One of my favorite places to spend part of a day is Square Books and its associated stores Off-Square Books (where overstock and used volumes are sold at a discount) and Square Books Jr. (my son’s preference of the three). One afternoon just after the spring semester ended I found and purchased this delightful volume at the main Square Books store. 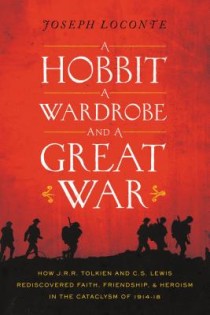 A Hobbit, A Wardrobe, and A Great War by Joseph Loconte

Regular readers of this blog will not be surprised that I am a fan of both C.S. Lewis (1898-1963) and J.R.R. Tolkien (1892-1973), given my own Christian commitment and the winsomeness and skill with which those authors communicated a worldview consistent with that faith. While he was a later convert to the faith than his friend and colleague, Lewis’s works—both fiction and non-fiction—were usually more expressly Christian in orientation than those of Tolkien. Neither was fully orthodox to the thinking of a Reformed Protestant; Lewis held unusual views in a number of areas and Tolkien was a Roman Catholic. Nevertheless, both men possessed insights which can be appreciated even by those who are suspicious of some of their theological sensibilities, particularly when it comes to seeing the detrimental effects of the loss of the West’s traditional and largely Christian ways of thinking and its replacement with a man- and “progress”-centered modernity which proved unable to bear up under the great upheavals of the twentieth century. The first and in some ways greatest of these upheavals was World War I—then more commonly known colloquially as the Great War—in which both Tolkien and Lewis served as officers. This is where Loconte’s volume enters, showing how the wartime experiences of these two great authors was so formative of the worlds and worldviews that they would create.

Loconte titles his first chapter “The Funeral of a Great Myth,” referring specifically to the so-called Myth of Progress, an expression of the optimism which permeated Western societies in the late nineteenth and early twentieth centuries. Convinced of the inevitable evolutionary growth of man and his societies during their time and rapidly discarding the metanarratives—both religious and otherwise—that had previously undergirded those societies, people expected that the twentieth century would see the ascent of humanity into times of unparalleled prosperity and felicity. The eruption of Europe into full-scale war in 1914 shattered all of that, especially as the new realities of machine guns, chemical weapons, and trench warfare  replaced the comparably genteel conduct of hostilities in previous generations. The Myth of Progress died along with so many men in the trenches of northern France, and Tolkien and Lewis came to realize that a new mythology—or at least a restatement and revitalization of old ones—would be needed to deliver people from a sense of meaninglessness.

In subsequent chapters Loconte shows how the wartime experiences of both Tolkien and Lewis shaped their iconic works, including The Lord of the Rings, The Chronicles of Narnia, and the Space Trilogy. Even in the introduction Tolkien is quoted as comparing Sam Gamgee to “the privates and batmen I knew in the 1914 war” (xvii), and in general he seems to have portrayed in his hobbits the industry, dedication, and plain yet noble traits he saw in common British soldiers. Meanwhile, the lords of Gondor represent the best of the officer corps. 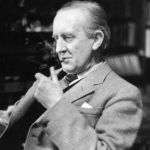 For Lewis wartime (and later) parallels can be found when contrasting the unspoiled natures of Narnia, Thulcandra, and Perleandra on the one hand and the demonic and/or technological perversions of the White Witch and the National Institute of Coordinated Experiments (N.I.C.E.) on the other. Tolkien likewise would compare the idyllic Shire and the almost-magical Lothlórien with the raping of the natural order committed by both Sauron and Saruman, not to mention the devastation of the Shire committed at the hands of the exiled Saruman and Wormtongue. Both authors saw the destruction wrought by increasing wartime technology as damaging to men’s souls as well as to their bodies, and created works whose heroes embodied nobility, chivalry, love of nature, and the simple pleasures of kith and kin while the villains sought to rule both nature and their fellows through unnatural means and with an iron fist, leaving destruction in their wakes.

While warfare played a major role in their works, neither Tolkien nor Lewis glamorized soldiery. They viewed it as a sometimes necessary evil but always as a means to the end of establishing or restoring peace, not as an end in itself. Their heroes always prefer the plow and the pen to the sword. Lewis in particular saw the growth of the social sciences as alternatives to theism and the commitment to absolute truth as an unhappy successor to the Myth of Progress, following this worldview to its unsavory ends in That Hideous Strength. While certainly neither man opposed academic study and the increase of knowledge, they saw the growth of a worldview lacking “timeless moral truths” (164) as highly detrimental.

In the end, “neither sought a return to the political or social ideals of Christendom. Nevertheless, they saw its tradition of valor and chivalry as both practical and vital” (172). “Rejecting equally the moods of militarism and pacifism, these authors charted a middle course: a partial return to the chivalrous ideal” (173). The wartime experiences of C.S. Lewis and J.R.R. Tolkien showed both men the emptiness of secular ideals, but also demonstrated the simple valor and homespun joys of ordinary people that alone can, in God’s providence, undergird a virtuous society. In this book, Joseph Loconte has performed a great service, introducing lovers of both Lewis and Tolkien to these experiences which were so formative for the fictional worlds through which they strove to show mankind a better way.

Micah Everett is Associate Professor of Music (Trombone/Low Brass) at the University of Mississippi, Principal Trombonist of the North Mississippi Symphony Orchestra, Tubist/Bass Trombonist of the Mississippi Brass Quintet, Bass Trombonist of the Great River Trombone Quartet, Assistant Editor (Audio/Video Reviews) for the International Trombone Association Journal, and an S.E. Shires trombone artist. He is the author of THE LOW BRASS PLAYER'S GUIDE TO DOUBLING, published by Mountain Peak Music, and released his first solo recording, STEPPING STONES FOR BASS TROMBONE, VOL. 1, on the Potenza Music label in 2015. In addition to his professional work, he maintains an avid interest in the study of the Bible and of Reformed theology. He holds doctoral and master's degrees in music from the University of North Carolina at Greensboro, a bachelor's degree in music education from Delta State University, and a certificate in systematic theology from Puritan Reformed Theological Seminary. The ideas and opinions expressed here are not necessarily shared by the employers and organizations with which the author is associated.
View all posts by Micah Everett →
This entry was posted in Apologetics, Book Reviews, C.S. Lewis, Christian Worldview, History, J.R.R. Tolkien, Providence, Society, Theology, Truth, Virtue. Bookmark the permalink.
%d bloggers like this: