This year we have more low brass students than ever at Ole Miss, and with a correspondingly large number of things going on both for me and for the students this fall, at least toward the end of the semester. The first couple of months will largely be spent preparing for all of this stuff! Here’s a short run-down of things going on around here later this fall.

This will be my fourth season with the North Mississippi Symphony Orchestra as first trombonist, and the schedule for this fall includes a classical concert, a performance of The Nutcracker with the Tupelo Ballet, and a Christmas program for chorus and orchestra. While my role in the orchestra is usually as a tenor trombonist, at various times I have found myself playing alto trombone, bass trombone, or euphonium in the group. 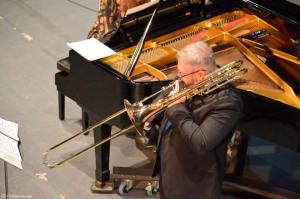 For my faculty recital on campus this year I will be following last year’s program for tenor trombone and euphonium with a program for bass trombone and tuba. The bass trombone portion will reprise the half recital I played on the first night of TROMBONANZA back in August, with works by Jacques Castérède, David William Brubeck, and Frank Gulino, while the tuba portion will include works by Anthony Plog, Gordon Jacob, and Øystein Baadsvik. After having put off taking up tuba in earnest for many years, I have been pleased with my progress on the instrument in the past year-and-a-half or so and am looking forward to presenting these works.

Although he has been at Ole Miss since January, the formal investiture of the university’s seventeenth chancellor will be held on November 10. I am pleased to announce that the University of Mississippi Trombone Ensemble has been asked to play for the processional and recessional during the event, in which the university faculty will enter and exit in full academic regalia.

The choirs at Ole Miss will be performing Carmina Burana by Carl Orff this November, and an ensemble of faculty, Memphis area musicians, and a few students has been engaged for the performance. An audience favorite, Orff’s work is frequently performed in various venues, and I have performed it a number of times in the past.

On November 16 British bass trombone soloist Jonathan Warburton will be presenting a recital and master class on campus. A champion of new music, Mr. Warburton has commissioned a number of works for bass trombone, and we hope to hear one or more new pieces during his visit to our campus.

Our low brass ensembles concert this semester is occurring later in the semester than usual, and given the proximity to the winter holiday we’ll be including a number of tunes appropriate for the season in addition to the types of works more typical of our programs. One highlight will be a performance of Eric Crees’s sixteen-trombone arrangement of Eric Clapton’s hit Layla, which first appeared twenty years ago now on the hugely successful (well, for trombone music anyway) album The London Trombone Sound.

Besides these events, there will be a number of student solo and ensemble performances, including three senior recitals that are still awaiting scheduling, activities with the Mississippi Brass Quintet and Great River Trombone Quartet, and the usual mix of “church gigs” and other smaller engagements for me. And, of course, lots and lots of teaching—between my work at the university and private teaching opportunities I am working with students over 30 hours per week at the moment. Mine is a busy but enjoyable life at the moment.

Micah Everett is Associate Professor of Music (Trombone/Low Brass) at the University of Mississippi, Principal Trombonist of the North Mississippi Symphony Orchestra, Tubist/Bass Trombonist of the Mississippi Brass Quintet, Bass Trombonist of the Great River Trombone Quartet, Assistant Editor (Audio/Video Reviews) for the International Trombone Association Journal, and an S.E. Shires trombone artist. He is the author of THE LOW BRASS PLAYER'S GUIDE TO DOUBLING, published by Mountain Peak Music, and released his first solo recording, STEPPING STONES FOR BASS TROMBONE, VOL. 1, on the Potenza Music label in 2015. In addition to his professional work, he maintains an avid interest in the study of the Bible and of Reformed theology. He holds doctoral and master's degrees in music from the University of North Carolina at Greensboro, a bachelor's degree in music education from Delta State University, and a certificate in systematic theology from Puritan Reformed Theological Seminary. The ideas and opinions expressed here are not necessarily shared by the employers and organizations with which the author is associated.
View all posts by Micah Everett →
This entry was posted in Alto Trombone, Anthony Plog, Bass Trombone, David William Brubeck, Education, Euphonium, Frank Gulino, Gordon Jacob, Higher Education, Jacques Casterede, Jonathan Warburton, Micah Everett, Music, Music Education, North Mississippi Symphony Orchestra, Oystein Baadsvik, Performances, Teaching Low Brass, Tenor Trombone, Trombone, Tuba, Uncategorized. Bookmark the permalink.
Loading Comments...
%d bloggers like this: