Well, Ole Miss’s football season, which began with such high expectations, ended 5-7 tonight (2-6 SEC) after not only a loss but a blowout at the hands of in-state rival Mississippi State (5-7 overall, 3-5 SEC). While a coaching shakeup is already underway, a case could be made for laying much of this season’s disappointment at the feet of injuries which have slowly but surely robbed our team of veteran starters on both sides of the ball. Perhaps most disappointing this season has been watching in multiple games how quickly our team lost its drive in the face of adversity. When things were going well and positive emotions were running high, the team performed well. When things were going poorly and negative emotions set in, the team spiraled into ineffectiveness. 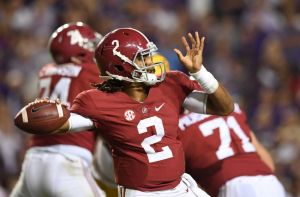 During a trombone ensemble rehearsal a couple of weeks ago I employed a sports analogy, exhorting my students to approach musicianship not like our football team, but like that of SEC West powerhouse Alabama (12-0 overall, 8-0 SEC). To watch Alabama’s team play is to watch a team that is in complete control of itself in every respect. Instead of displaying a palpable emotional excitement when winning, the Crimson Tide team appears downright businesslike, as if they simply showed up to do a job, and then executed the job in exactly the way they planned. In other words, this team’s fundamentals of ball handling, clock management, play execution, etc. are so well-honed that these young men are rarely caught operating outside of a well-established rhythm. While these players no doubt experience positive emotions as a result of their repeated wins, the “good vibes” are a result of successful play, not a cause of it.

Needless to say, my students were taken aback at first by this analogy, but they soon came to appreciate it. Musicians are certainly in the business of creating and stirring emotions in our listeners, but to depend on the experience of such feelings ourselves is to invite disaster on stage. Not only might one’s emotional state at the moment of performance be incongruent with the message of the piece of music being performed, but reliance upon feelings to deliver effective performance makes one even more susceptible to that most dangerous feeling for the performing musician: fear. Performance anxiety affects nearly all of us to a greater or lesser extent, and to depend upon feelings to enable us to deliver effective performances makes it even more likely that the slightest surprise or unexpected difficulty on stage will elicit a sense of despair that jeopardizes the entire performance.

Instead, just like effective athletes, we must depend upon solid playing fundamentals to enable us to deliver quality performances. This begins simply with regular and diligent practice, but more specifically requires daily, systematic, and comprehensive practice of playing fundamentals. Many players and teachers have found this to be best accomplished through the use of a daily routine that varies little from day to day. Others recommend that the specific content of fundamentals practice be more varied, though the same general areas are covered each day. Both approaches can be effective, though I prefer the former and have published several routines to that end here.

When our playing fundamentals are consistent and dependable then we can count on things to work regardless of the playing situations in which we find ourselves. There may still sometimes be “butterflies” before or during especially important performances, but relying upon consistent method rather than positive feelings to yield effective playing means that any nervousness can be expected and even welcomed without having a negative effect upon the performance. This also leaves us free to infuse our performances with whatever emotions are demanded by the music or chosen by us, just like great actors will do. Will we experience “good vibes” as a result of this? Probably so, but just like those great Alabama players the positive feelings will be the result rather than the cause of successful performance.

And with this, I will take my usual December hiatus from blogging. I look forward to sharing more thoughts with you all again beginning sometime in mid-January.

Micah Everett is Associate Professor of Music (Trombone/Low Brass) at the University of Mississippi, Principal Trombonist of the North Mississippi Symphony Orchestra, Interim Music Director at College Hill Presbyterian Church, Assistant Editor (Audio/Video Reviews) for the International Trombone Association Journal, and an S.E. Shires trombone artist. He is the author of THE LOW BRASS PLAYER'S GUIDE TO DOUBLING, published by Mountain Peak Music, and released two solo recordings, STEPPING STONES FOR BASS TROMBONE, VOLS. 1 and 2, on the Potenza Music label in 2015 and 2022, respectively. In addition to his professional work, he maintains an avid interest in the study of the Bible and of Reformed theology. He holds doctoral and master's degrees in music from the University of North Carolina at Greensboro, a bachelor's degree in music education from Delta State University, and a certificate in systematic theology from Puritan Reformed Theological Seminary.
View all posts by Micah Everett →
This entry was posted in Alto Trombone, Bass Trombone, Daily Routine, Euphonium, Higher Education, Intercollegiate Athletics, Music, Pedagogy, Performance Anxiety, Performing, Playing Fundamentals, Practicing, Teaching Low Brass, Tenor Trombone, Trombone, Tuba. Bookmark the permalink.
Loading Comments...
%d bloggers like this: