Those who know me even a little bit know that my family and I are Star Wars fans. We are so not because we think the stories are great literature much less present a philosophical system that is compatible with our own Christian worldview, but simply because the universe George Lucas (b. 1944) and his successors have created provides a fun bit of hugely imaginative escapism. We not only enjoy the movies but also a few of the novels, and especially the animated series The Clone Wars and Star Wars: Rebels. My writing here has to do with Episode 20 of Season 3 of the latter series, which aired tonight and is entitled “Twin Suns.”

The events of this episode take place approximately 16-17 years after the events of Star Wars Episode III: Revenge of the Sith, and thus 2-3 years prior to the events of the original Star Wars film, Episode IV: A New Hope. Here we find Darth Maul, who during The Clone Wars series had been found to have improbably survived being cut in half during his duel with Obi-Wan Kenobi in Episode I: The Phantom Menace, and has spent the past 30 years planning and occasionally exercising some vengeance upon Kenobi for his shattered life. Through some clever psychological manipulation of Jedi Padawan Ezra Bridger Maul has discovered that Kenobi is living in exile someplace on the desert planet of Tatooine, and at the end of the episode at last finds and confronts Kenobi, seeking a fight to the death. 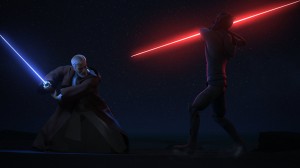 Kenobi, here cleverly portrayed for the first time in an animated version more like his elderly self as first played by Sir Alec Guinness (1914-2000), is reluctant to fight but resigns himself to doing so once Maul begins to divine Kenobi’s purpose on Tatooine as Luke Skywalker’s guardian. The two aged warriors draw their weapons and study each other for an extended period, evidently not only planning their own attack strategies but also seeking to anticipate one another’s moves. Kenobi begins with an attack posture like that used by his younger self in the Star Wars prequels, but soon settles into the simpler, more economical style of Guinness’s swordplay. In the end, this economy wins the day, as after parrying just twice Kenobi with a simple gesture both severs Maul’s double-bladed lightsaber and mortally wounds his opponent in the chest. Both before and after the encounter Kenobi seems to regard Maul more with pity than anything else, as he has been used and discarded by the Emperor just like the Jedi Order, the Republic, and the former peace which prevailed in the galaxy.

At this point, you’re wondering “What on earth does all of this have to do with brass playing?” In a blog post several years ago I used a somewhat tortured description of the duel between Kenobi and General Grievous in Episode III to illustrate something about brass playing, namely that just as the more economical actions of Kenobi won the day over the busier activity of Grievous, so greater efficiency in brass playing yields better results than lots of extraneous effort. This new duel between Kenobi and Maul makes that point even more dramatically. In brass playing—and evidently in lightsaber dueling—efficient, economical actions always win the day.

Now back to practicing…and seeking to “practice what I preach!”

Micah Everett is Associate Professor of Music (Trombone/Low Brass) at the University of Mississippi, Principal Trombonist of the North Mississippi Symphony Orchestra, Interim Music Director at College Hill Presbyterian Church, Assistant Editor (Audio/Video Reviews) for the International Trombone Association Journal, and an S.E. Shires trombone artist. He is the author of THE LOW BRASS PLAYER'S GUIDE TO DOUBLING, published by Mountain Peak Music, and released two solo recordings, STEPPING STONES FOR BASS TROMBONE, VOLS. 1 and 2, on the Potenza Music label in 2015 and 2022, respectively. In addition to his professional work, he maintains an avid interest in the study of the Bible and of Reformed theology. He holds doctoral and master's degrees in music from the University of North Carolina at Greensboro, a bachelor's degree in music education from Delta State University, and a certificate in systematic theology from Puritan Reformed Theological Seminary.
View all posts by Micah Everett →
This entry was posted in Alto Trombone, Bass Trombone, Education, Euphonium, Music, Performing, Practicing, Star Wars, Teaching Low Brass, Tenor Trombone, Trombone, Tuba. Bookmark the permalink.
Loading Comments...
%d bloggers like this: