Recording practice sessions and lessons is an important tool for identifying and correcting execution errors and thus improving performance, and on the whole the ubiquitous presence of smartphones capable of making audio and/or video recordings has been a boon to students’ abilities to practice in this way. However, musicians generally have been unimpressed by the sound quality produced using the microphones installed on these devices and have continued to rely on dedicated recording equipment in order to realize a reasonable quality of sound reproduction. While memory limitations on most smartphones necessitate that “real” recording equipment be retained for recording longer sessions or events, the items I’m highlighting today can facilitate the recording of shorter portions of a piece or exercise using a smartphone or other handheld device but with the sound quality provided by external powered microphones. Provided that your microphones are handy and already set up (such as in a teaching studio or dedicated practice space) this enables the taking of quick recordings with the only setup required being the plugging of a single cord into the phone’s headphone/microphone jack. In lessons I’ve even been able to make the recordings using students’ phones, eliminating the extra steps of recording on my camera or sound recorder, transferring files to my computer, uploading to Dropbox, and emailing to students. The only disappointment thus far has been with students who have the iPhone 7, the absence of a headphone/microphone jack making the use of these microphones impossible without added adapters.

The device I’ve used primarily for recording practice sessions and lessons in my studio at the university is the Saramonic SmartRig+. With two XLR inputs and two TRS inputs, one could theoretically bring sound from as many as four microphones into a smartphone or other recording device. So far I have been using only a pair of Røde NT5 condenser mics which are mounted to one wall in my studio. It has dials for adjusting sound levels and balance so with a bit of experimentation one can arrive at a desirable quality of sound. Since its only real function is providing phantom power to the mics and transferring sound to a recording device the SmartRig+ requires very little power to operate, which is supplied by a single 9-volt battery. My only complaint about the device so far is that in my hands the construction feels a bit flimsy; the housing is entirely made of plastic. But, so far it has done the job I have assigned to it exceedingly well. 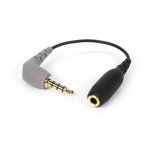 A simpler, more portable, and much less expensive option is a small adapter cable which transfers the sound from the TRS cable found on many microphones to a TRRS plug as required by the input on most smartphones. I am using a Røde SC4 for this purpose. At only 3 inches it doesn’t provide much length, so if your microphone cable is short you might need an extension cable of some kind, but it does facilitate the transfer of sound as needed. This adapter cable obviously provides no power, so the microphone used will need to have an internal power supply. I am using a Sony ECM-MS907, a very fine older mic which has good sound quality and is powered by a single AA battery which always seems to last forever. The sound produced from this setup is somewhat inferior to that achieved by the NT5’s in my office, but in the absence of all of that equipment this gets the job done admirably.

Again, memory limitations on most smartphones will dictate that one have dedicated recording equipment, high-capacity SD cards, etc. for recording concerts, entire lessons, and other longer engagements. But, for capturing short clips to assist in practicing and teaching, these setups are simple, inexpensive, can be used quickly and easily, and are a vast improvement over the poor sound quality usually captured on smartphones.

Micah Everett is Associate Professor of Music (Trombone/Low Brass) at the University of Mississippi, Principal Trombonist of the North Mississippi Symphony Orchestra, Interim Music Director at College Hill Presbyterian Church, Assistant Editor (Audio/Video Reviews) for the International Trombone Association Journal, and an S.E. Shires trombone artist. He is the author of THE LOW BRASS PLAYER'S GUIDE TO DOUBLING, published by Mountain Peak Music, and released two solo recordings, STEPPING STONES FOR BASS TROMBONE, VOLS. 1 and 2, on the Potenza Music label in 2015 and 2022, respectively. In addition to his professional work, he maintains an avid interest in the study of the Bible and of Reformed theology. He holds doctoral and master's degrees in music from the University of North Carolina at Greensboro, a bachelor's degree in music education from Delta State University, and a certificate in systematic theology from Puritan Reformed Theological Seminary.
View all posts by Micah Everett →
This entry was posted in "Gadgets and Gizmos", Accessories, Instructional Technology, Music, Pedagogy, Practicing, Smartphones, Teaching Low Brass. Bookmark the permalink.
Loading Comments...
%d bloggers like this: