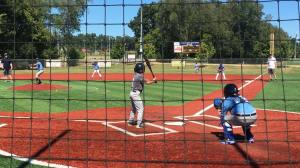 Our son, Brody, pitching in a recent game.

Any parent will tell you that the experience of raising a child or children is an adventure, one in which parents often find themselves improvising, trying to do the best they can for their children but not always sure of what that “best” actually is. Parents of adopted children have an additional challenge in that they cannot based upon their own abilities anticipate what natural giftings those children might have, and “nature versus nurture” questions frequently arise. In our son’s case, being raised by two music teachers certainly has some bearing upon his budding skills as a violinist, though inherited traits undoubtedly play a role, as well. More obviously “natural” are his skills in sports, traits which neither his mother nor I possess. While I am still able to be of some use coaching him in baseball, this has to do mainly with my having the hand-eye coordination of an average adult combined with 30-plus years as a spectator. His abilities far exceed mine at the same age (I played right field in Little League, and we all know what that means), and will undoubtedly surpass my current skills before very long.

Observing and assisting with my son’s development as a ballplayer has led me to notice some interesting similarities between building skills in a sport and the same process on a musical instrument. In fact, the processes are identical in some respects, thus rendering my experience as a musician surprisingly relevant to his baseball practice. Here are a few thoughts on the subject.

The Necessity of Innate Ability
In music lessons I place as little emphasis as I can on the idea of “natural talent,” preferring to emphasize the importance of disciplined hard work. My students often hear me exhort them to practice “daily and systematically” in order to most efficiently increase their playing skills. Nevertheless, innate ability certainly plays a role in skill development. The physical “chops” needed to play the instrument well come very naturally to some students, while others must engage in a daily regimen of exercises just to remain functional. Similarly, some students have a “good ear” seemingly from birth, while others spend hours drilling musical passages, listening to recordings, and practicing solfège just to keep up with those in the first group. Every student has a certain amount of “chops” and “ear” naturally; those with above-average skills in one or both areas have marked advantages over those of average ability or less.

The same is true in sports. This fall my son has moved up to a “kid-pitch” team for the first time, and currently pitches one inning per game. While he has to spend time perfecting his skills on the mound for both accuracy and speed, his natural abilities give him a head start over kids of very limited athletic ability, as I was. At his age I could have spent hours throwing pitches and refining my wind-up and delivery, and still might not have reached the same skill level that he has. Nevertheless, a child with less innate ability than my son, but more than me, might with practice meet and exceed his skill level because of…

The Limitations of Innate Ability
I once heard a great trombonist say that the players that enjoy the greatest success are not those with the most natural talent, but those just below the top in that respect. The implication was that supremely talented individuals, many of whom move through their early and advanced training with minimal effort, become totally derailed when they at last encounter a significant obstacle to further progress. Those in the second tier, as it were, while still above-average in innate ability, have developed the conceptual, physical, and psychological tools needed to overcome significant difficulties, and thus eventually surpass their more “talented” colleagues. My students have heard me refer to “The Wall,” my term for the point at which an individual can no longer rely primarily on natural talent and has to actually work to solve problems and overcome difficulties. For some, this point comes in the first week, while for others it might be in the second or third year, but it nearly always comes. Figuring out how to physically and psychologically overcome these challenges and continue to grow and progress is an important part of the musician’s development. Although we are still quite early in my son’s sports career, I am beginning to observe a similar pattern there.

The Type of Practice that Brings Results

Brody and me practicing scales together.

As I am sure is the case with most eight-year-old violinists, getting our son to practice without argument is a perpetual challenge. While at the end of a productive practice session he will grudgingly admit that he enjoys playing, he is less fond of practicing scales, perfecting his bowing, and correcting minor errors once he has the gist of a piece. Yet it is this daily and systematic practice of playing fundamentals that spurs his greatest growth as a musician.

It is the same with baseball. With an eight-year-old pitcher the primary objective is to throw strikes. The pitches do not have to be extremely fast, nor is this the time to practice curveballs, changeups, and other specialty pitches. They only need to be accurate. Yet getting him to systematically develop the pacing, technique, and consistency to throw across the plate most of the time is a challenge when the desire to try exotic pitches is so great. Throwing not-all-that-fast-balls over and over again is not exciting, but it is effective. The same can be said for time spent in the batting cage.

Effective practice—in music and in sports—is usually repetitive and sometimes boring, but it works.

The Necessity of Quality Instruction
When we decided a couple of years ago to have our son begin violin lessons we considered whether or not to teach him ourselves or to hire a teacher to give him lessons. While neither my wife nor I are violinists, we are both trained music educators and have sufficient knowledge to teach beginning strings. Despite this, the desire to have an outside authority figure behind his instruction (besides “just mom and dad”) led us to engage a teacher. Two years later, his skills have reached the point that, although my wife in particular can observe his practice and remind him of certain elements of his teacher’s instructions, the superior knowledge and experience of his violin teacher is necessary for him to make further progress. Similarly, if he continues in baseball—particularly pitching—too much further we will have to consider getting professional coaching for him. The limited abilities of an observant father simply will not suffice for very long, no matter how talented the son happens to be.

The Need to Have Fun!
I am getting old enough now that I can credibly grumble about youngsters’ apparent disdain for hard work, but the pursuit of both music and sports should not be so dominated by disciplined activities that there is no room for enjoyment. Pick-up games of baseball among neighborhood kids are still important. Sitting around playing Real Book tunes is fun, and easier than ever now with free accompaniments so readily available. My son even enjoys playing his violin along with videos of Queen and other classic rock groups, barely aware of how much vital ear training is happening as he does this.

Playing music and playing sports—the operative word is “playing,” and we must never forget that these activities should be enjoyable both for us and for listeners and spectators.

But let us also remember that the greatest enjoyment is usually of the “delayed gratification” variety, the satisfaction that comes with the mastery of a new skill or new piece after weeks and months and years of hard work. Hard work and great fun can and should go together!

Micah Everett is Associate Professor of Music (Trombone/Low Brass) at the University of Mississippi, Principal Trombonist of the North Mississippi Symphony Orchestra, Tubist/Bass Trombonist of the Mississippi Brass Quintet, Bass Trombonist of the Great River Trombone Quartet, Assistant Editor (Audio/Video Reviews) for the International Trombone Association Journal, and an S.E. Shires trombone artist. He is the author of THE LOW BRASS PLAYER'S GUIDE TO DOUBLING, published by Mountain Peak Music, and released his first solo recording, STEPPING STONES FOR BASS TROMBONE, VOL. 1, on the Potenza Music label in 2015. In addition to his professional work, he maintains an avid interest in the study of the Bible and of Reformed theology. He holds doctoral and master's degrees in music from the University of North Carolina at Greensboro, a bachelor's degree in music education from Delta State University, and a certificate in systematic theology from Puritan Reformed Theological Seminary. The ideas and opinions expressed here are not necessarily shared by the employers and organizations with which the author is associated.
View all posts by Micah Everett →
This entry was posted in Baseball, Music, Parenting, Pedagogy, Practicing, Scales and Arpeggios, Sports, Teaching Low Brass. Bookmark the permalink.
Loading Comments...
%d bloggers like this: