Midterm exams at Ole Miss are next week, so I suppose it’s a bit late to be writing a post about spring activities. Indeed, we’ve already had a few goings on in the low brass studio, including a trombone ensemble performance of the national anthem at the women’s basketball game against Auburn and a master class and recital by the trumpet and trombone faculty at the University of Arkansas. But the major performing activities for the spring and summer begin in earnest tonight, so maybe I’m not too far behind schedule with this post. 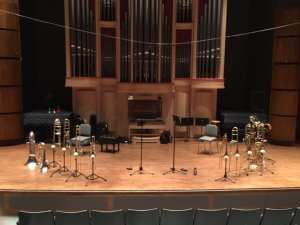 Our setup for tonight’s recital. That’s a lot of instruments!

Tuesday, February 19: Guest Artist Appearance at the University of South Carolina
I first met U of SC Trombone Professor Dr. Michael Wilkinson when we were assigned as roommates at the Alessi Seminar in 2015. Through the course of those ten days we discovered that we had a number of shared professional interests, one being the practice of doubling on multiple low brass instruments. At that time we began to formulate the idea of putting together a massive doubling recital where we would both play multiple instruments. It has taken four years for that idea to come to fruition, but tonight we will be performing that recital, with a total of 13 instruments being played between the two of us. I had a fine master class and lecture with Dr. Wilkinson’s students yesterday, as well. This event was funded through the Southeastern Conference Faculty Travel Program, and we hope to use that funding source to enable future performances at Ole Miss and at other SEC schools. 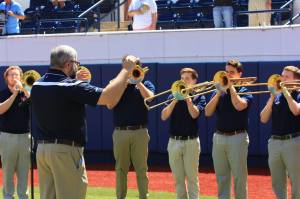 Saturday, April 6, and Friday, April 26: National Anthem Performances for Ole Miss Baseball
Performing the national anthem at sporting events is a small but important opportunity for outreach for our low brass ensembles, and we are happy to regularly appear at both basketball and baseball games on campus. This spring the tuba-euphonium ensemble will perform for the game against Florida on April 6, and the trombone ensemble for the Texas A&M game on April 26.

Tuesday, April 23: UM Low Brass Ensembles Concert
The spring concert with the trombone and tuba-euphonium ensembles will primarily feature repertoire scheduled for our performances at major international conferences this summer. These are discussed in greater detail below.

Wednesday, April 24: UM Faculty Brass and Woodwind Quintets
Rather than presenting separate concerts, which is our usual practice, this spring the faculty brass and woodwind quintets will present a joint recital, featuring works for the two groups separately as well as one or two pieces for a larger combined dectet.

Tuesday, April 30: Tuba Solo with the UM Symphonic Band
During my seven years at Ole Miss I’ve enjoyed multiple opportunities to perform as soloist with our student ensembles, including multiple appearances with the UM Wind Ensemble as well as performances with the Lafayette-Oxford-University Symphony Orchestra and the UM Concert Band. This will be my first appearance as soloist with the UM Symphonic Band, performing Tapestry for Tuba by Michael Brand (b. 1952). This is a new piece to me, suggested by the band’s conductor, Randy Dale. It looks fun!

Monday, May 27-Saturday, June 1: International Tuba-Euphonium Conference
One of my goals when I came to Ole Miss was to establish trombone and tuba-euphonium ensembles and then build the quality of those ensembles to the point that they could perform at major conferences for our instruments. While our groups have appeared at regional events in the past, I’m thrilled that both of our ensembles will perform at their respective conferences, the tuba-euphonium ensemble at the International Tuba-Euphonium Conference at the University of Iowa, and the trombone ensemble at the International Trombone Festival at Ball State University. These are wonderful performance activities for our students, but I’m most excited about the opportunities our students will have for hearing, learning from, and interacting with the top players and teachers in our field, as well as their colleagues from other universities and organizations around the world.

Wednesday-Saturday, July 10-13: International Trombone Festival
In addition to the trombone ensemble performance at the ITF, which I’ve already mentioned, I’ll be performing an alto trombone solo during the event. Mythos II: The War of the Wood is an unaccompanied work by David Herring (b. 1970) that I discovered a few years ago and performed back in 2015. It has not been played very much, but it is a fun and challenging programmatic work depicting a battle between two very different sets of mythical creatures: Sprites and Gremlins. The extended techniques and even warlike yells in the piece are quite a departure from the far calmer late Baroque/early Classical repertoire usually performed on the alto trombone. Here’s a movement from that 2015 performance to give you an idea of the piece:

Wednesday-Sunday, July 24-28: ClarinetFest® 2019
ClarinetFest®? Really? What are you going to be doing there? Last spring I began a collaboration with UM clarinet professor Dr. Michael Rowlett, playing works “appropriated” for clarinet/euphonium duo. This pairing works exceedingly well, and we have so far given two performances, one in my faculty recital last spring, and then back in October at the College Music Society/National Association of College Wind and Percussion Instructors Conference in Vancouver. Dr. Rowlett applied for us to reprise the CMS/NACWPI program at this year’s ClarinetFest®, so I am looking forward to a new and different conference experience for me as the lone euphoniumist in a sea of clarinet players at the University of Tennessee. We’ll perform two pieces, one of the clarinet/bassoon duos by Ludwig van Beethoven (1770-1827), and the humorous clarinet/bass work Little Musical Flower-Garden with Leyptziger Assortment by Paul Hindemith (1895-1963). Here is our performance of the Hindemith from last spring:

This is, of course, not a comprehensive list. There will be lots and lots of teaching, student recitals, performances with the North Mississippi Symphony Orchestra, and assorted other gigs. But these are the major events around which I’m orienting my calendar for the next few months. I have a new book project in the works as well, and maybe I’ll be able to find time to work on it around all of this other activity. I hope so.

Micah Everett is Associate Professor of Music (Trombone/Low Brass) at the University of Mississippi, Principal Trombonist of the North Mississippi Symphony Orchestra, Tubist/Bass Trombonist of the Mississippi Brass Quintet, Bass Trombonist of the Great River Trombone Quartet, Assistant Editor (Audio/Video Reviews) for the International Trombone Association Journal, and an S.E. Shires trombone artist. He is the author of THE LOW BRASS PLAYER'S GUIDE TO DOUBLING, published by Mountain Peak Music, and released his first solo recording, STEPPING STONES FOR BASS TROMBONE, VOL. 1, on the Potenza Music label in 2015. In addition to his professional work, he maintains an avid interest in the study of the Bible and of Reformed theology. He holds doctoral and master's degrees in music from the University of North Carolina at Greensboro, a bachelor's degree in music education from Delta State University, and a certificate in systematic theology from Puritan Reformed Theological Seminary. The ideas and opinions expressed here are not necessarily shared by the employers and organizations with which the author is associated.
View all posts by Micah Everett →
This entry was posted in Alessi Seminar, Alto Trombone, Baseball, Bass Trombone, ClarinetFest, David Herring, Doubling, Euphonium, International Trombone Festival, International Tuba-Euphonium Conference, Ludwig van Beethoven, Micah Everett, Michael Brand, Michael Rowlett, Michael Wilkinson, Music, Paul Hindemith, Performances, Performing, Randy Dale, Teaching Low Brass, Tenor Trombone, Trombone, Tuba, University of Mississippi. Bookmark the permalink.
%d bloggers like this: