Toward a More “Evolved” Right Hand Position on Trombone

Despite its many benefits for intonation, elegance (in accomplished hands, at least), and vaudeville effects, the trombone’s handslide presents technical difficulties for young players unlike those encountered by players of other wind instruments. While hard work is required to master slide technique, the difficulty of this is lessened considerably when trombonists use a right hand position that facilitates efficient movement. In my article “Demystifying Trombone Legato: A Simple Approach,” published in School Band and Orchestra Magazine in 2016, I wrote the following regarding the right hand position:

While there are a variety of hand positions advocated by professional trombonists, whatever hand position is used should allow the player to use all of the joints of the fingers, wrist, elbow, and shoulder in order to move the slide, making finer adjustments with the smaller joints, and larger adjustments with the larger ones. This helps to prevent jerky motions that often take place when the elbow and shoulder have a dominant role in slide movement, and also enables better tuning.

I took a more specific approach in my 2014 book The Low Brass Player’s Guide to Doubling, where, in a chapter coauthored by University of North Florida professor Marc Dickman, we wrote the following: 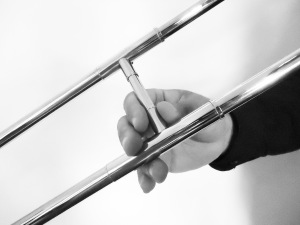 The handslide should be held with the tips of the first and second fingers and thumb of the right hand, with the third and fourth fingers extended, so the entire hand is able to move together without unnecessary tension. (See photo.) Strive to use all of the joints of the fingers, hand, wrist, elbow, and shoulder in tandem so that slide motion is quick, efficient, and fluid.

It is very important to hold the handslide using the fingertips rather than closer to the hand (the jointed knuckle area). Holding the handslide correctly makes the smaller joints of the fingers available for fine intonation adjustments, a task for which these joints are far better suited than the elbow or even the wrist. This also promotes a gentle slide action in which gravity and inertia do much of the work, rather than a more muscular approach which is inefficient and can cause both intonation difficulties and slide alignment problems.

While I am unwilling to contend that the hand position I use and advocate is the only one that works, problems ensue when the hand position is allowed to “devolve” into one where the slide brace is held closer to the hand. When that happens one loses the ability to use the joints of the fingers to make finer slide movements, and is left trying to make sometimes very small and delicate movements with the elbow and shoulder, which are ill-equipped for the task. I have been fond of comparing this to using a sledgehammer to drive small nails for hanging pictures on a wall. This is theoretically possible, but you are more likely to find yourself patching drywall!

In the past few weeks I’ve taken to using another humorous comparison, referring to the Evolution of Man charts that we all remember from high school science textbooks. For whatever reason, the incorrect hand positions to which I am referring remind me of the drawings two or three steps back from Man in his current condition—or perhaps forward to the additional figure seen in the humorous comic below. Either way, for the sake of good intonation and efficient technique, let’s all make sure that we operate the handslide in the most “evolved” manner possible!

Micah Everett is Associate Professor of Music (Trombone/Low Brass) at the University of Mississippi, Principal Trombonist of the North Mississippi Symphony Orchestra, Tubist/Bass Trombonist of the Mississippi Brass Quintet, Bass Trombonist of the Great River Trombone Quartet, Assistant Editor (Audio/Video Reviews) for the International Trombone Association Journal, and an S.E. Shires trombone artist. He is the author of THE LOW BRASS PLAYER'S GUIDE TO DOUBLING, published by Mountain Peak Music, and released his first solo recording, STEPPING STONES FOR BASS TROMBONE, VOL. 1, on the Potenza Music label in 2015. In addition to his professional work, he maintains an avid interest in the study of the Bible and of Reformed theology. He holds doctoral and master's degrees in music from the University of North Carolina at Greensboro, a bachelor's degree in music education from Delta State University, and a certificate in systematic theology from Puritan Reformed Theological Seminary. The ideas and opinions expressed here are not necessarily shared by the employers and organizations with which the author is associated.
View all posts by Micah Everett →
This entry was posted in Alto Trombone, Bass Trombone, Contrabass Trombone, Marc Dickman, Music, Music Education, Pedagogy, Playing Fundamentals, Teaching Low Brass, Tenor Trombone, Trombone. Bookmark the permalink.
%d bloggers like this: