I cannot think of a time in my life as a brass player that I did not believe in the importance of daily, systematic practice of playing fundamentals. The public school band program of which I was a part growing up always had us playing ensemble routines of at least long tones, lip slurs, scales, and articulation exercises, along with regimented systems of “pass-offs,” and my private instructor prescribed her own routine, as well. I had heard of “Remington long tones” long before I knew anything about Emory Remington (1891-1971), the famed trombone teacher from the Eastman School of Music who ended up becoming, in a manner of speaking, my “trombone grandfather,” since my undergraduate trombone professor was a student of Remington. 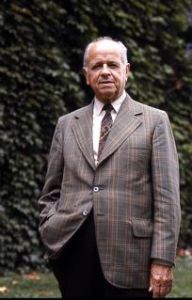 There are two developments in trombone pedagogy, as well as brass pedagogy more broadly, with which Remington is perhaps most often credited. One is the use of the trombone ensemble as a teaching tool. While the idea of a trombone choir or ensemble or consort goes back at least four or five centuries, the establishment of the Eastman Trombone Choir as a combination of performing group and group instructional time started a trend that has been replicated in college, university, conservatory, and other music programs worldwide, and on more instruments than just the trombone. Like-instrument ensembles provide a special forum for group instruction, in which younger or weaker players learn by emulating the sounds and techniques of more experienced players, and all benefit from the challenges of perfecting balance, blend, and intonation in a context where minor discrepancies cannot hide among the timbres of different instruments. For low brass players such ensembles also provide an opportunity to perform more challenging melodic and figurative material than our instruments are normally assigned in orchestras or bands, and transcriptions of band and orchestra works allow future conductors to learn parts normally assigned to other instruments. Such ensembles really are a vital part of applied instruction, which is why I established both trombone and tuba-euphonium ensembles at Ole Miss immediately upon my arrival.

A second development associated with Remington, and the primary topic of my discussion today, is his concept of a “balanced daily routine.” Remington believed that trombonists should practice playing fundamentals each day in a consistent, balanced, and comprehensive manner in order not only to “warm up,” but more importantly to both maintain and extend basic playing skills. I wrote at length about the elements of such a routine a number of years ago when first starting this blog, so rather than repeat myself today I’ll refer you to that two-part series here and here. As you’ll see from reading there, I advocate covering in some way practically every facet of brass playing technique in some way on a daily basis.

As I alluded in the opening paragraph, I began approaching playing fundamentals practice in this way even before I had heard much—if anything—about Emory Remington, and have continued to practice in this way for nearly thirty years. As I am fond of telling my students, I came by having a “good ear” more or less naturally, but technical playing skills do not come naturally to me at all. If I neglect fundamentals practice for even a day or two I notice an immediate decline in my playing abilities. Nevertheless, in the past ten years or so I have heard more and more players, particularly in online forums of various kinds, “pooh-pooh” the idea of a daily routine. These folks insist that daily repetition of exercises leads to stale and uninteresting musicianship, and is a waste of time that could be better spent playing “actual music.” To that argument I would respond in several ways.

First of all, I’m willing to concede that there are some people who are simply gifted technicians on the instrument, people who develop even the most advanced technical skills with seemingly no effort. I had a friend like this in college and it made me sick—he could do some of the fastest lip trills I’ve ever heard without practicing them at all, while I had to practice them daily for five years before I could play them decently. I still have to practice them daily to maintain the skill! Most of us aren’t so fortunate in this area, and even those who seem to be “naturals” on the instrument should still engage in some daily fundamentals work, both to build stamina and to better learn how to teach others who have a more obvious need for such exercises.

Secondly, most players who argue against playing the same fundamentals routine each day do not actually advocate totally neglecting fundamentals practice. They are simply more willing to modify their routines from day to day, selecting from a wide variety of exercises according to the needs of the moment. One way or another, their practicing still tends to systematically address the same types of skills that I listed in those previous two articles. And while I definitely tend toward the “same routine every day” end of the spectrum, even I will make small modifications as needed for time, or to address particular needs.

Finally, while the voices on the internet questioning the need for a daily routine sometimes seem to be many, they aren’t usually the best voices. One of my favorite activities when attending conferences like the International Trombone Festival and the International Tuba-Euphonium Conference is going to the daily group warm-up sessions, which are conducted by some of the leading players and teachers in our field. Interestingly, they all advocate some kind of thoughtful, thorough, daily approach to playing fundamentals. None of them “just pick up the horn and play.” I enjoy taking insights from these sessions and making improvements to my own routines in response.

In last week’s article which began this “Essential Concepts” series I opined that sound concept is more important than technique, and in subsequent entries in the series I hope to advocate something of a “singing approach” to playing. Indeed, if I were to add a third element of Remington’s influence to the two I mentioned earlier it would be his practice of singing with his students for the entire hour, seeking to instill in them an approach to tone and expression that were like those of great singers. While the daily routine’s focus on technical skill development might seem to be at odds with this more intuitive approach, it really isn’t so—and Remington clearly didn’t think so. Rather, the daily routine’s purpose it to prepare the body in such a way that it is most responsive to the commands given by the player’s brain. Only when the body is optimally prepared to play can that intuitive, singing approach truly take place.

Micah Everett is Associate Professor of Music (Trombone/Low Brass) at the University of Mississippi, Principal Trombonist of the North Mississippi Symphony Orchestra, Interim Music Director at College Hill Presbyterian Church, Assistant Editor (Audio/Video Reviews) for the International Trombone Association Journal, and an S.E. Shires trombone artist. He is the author of THE LOW BRASS PLAYER'S GUIDE TO DOUBLING, published by Mountain Peak Music, and released two solo recordings, STEPPING STONES FOR BASS TROMBONE, VOLS. 1 and 2, on the Potenza Music label in 2015 and 2022, respectively. In addition to his professional work, he maintains an avid interest in the study of the Bible and of Reformed theology. He holds doctoral and master's degrees in music from the University of North Carolina at Greensboro, a bachelor's degree in music education from Delta State University, and a certificate in systematic theology from Puritan Reformed Theological Seminary.
View all posts by Micah Everett →
This entry was posted in Alto Trombone, Baritone Horn, Bass Trombone, Conferences, Daily Routine, Emory Remington, Essential Concepts in Brass Playing, Euphonium, International Trombone Festival, International Tuba-Euphonium Conference, Music, Pedagogy, Playing Fundamentals, Practicing, Teaching Low Brass, Tenor Trombone, Trombone, Trombone Ensembles, Tuba, Tuba-Euphonium Ensembles, University of Mississippi. Bookmark the permalink.
Loading Comments...
%d bloggers like this: