I still remember very clearly the first time I heard a solo recording of a professional trombonist. I was a junior in high school, and a friend from the all-state band that went to another school in my county brought his copy of Romantic Trombone Concertos by Christian Lindberg (b. 1958) to my house. While I was (and still am) impressed by the quality and virtuosity of Lindberg’s playing, I was before this only vaguely aware that trombone solos with orchestra even existed, much less were on recordings that could be purchased, so this disc opened my eyes to a new (to me) world of music making. I borrowed my friend’s CD for a while and listened to it multiple times, and eventually I obtained catalogs (paper catalogs!) from companies from which I could order my own copies of this and other recordings.

If my ignorance of the existence of these recordings and how to obtain them is surprising to you, please remember that this was around 25 years ago. Home internet access and e-commerce were still very new, and I did not own an internet-capable computer until just before my high school graduation. In 1995 I still lived very much in a mail-order world. How different this is from today, when recordings in even the most niche genres are easily obtainable, whether purchased in hard copy, as downloads, or as part of a streaming service. When I was a young student, I might have been excused for not listening to recordings of great brass players because I did not know how to obtain them—or even to look for them at all. Today’s students can listen to a large percentage of the available recorded repertoire for their instruments for little or no cost, yet many do not do so. The question is, why?

Some students—perhaps many students—do not listen to recordings of great players on their instruments simply because of laziness. They lack the ambition to take advantage of this simple means of improving themselves, and that is unfortunate. But those who decide to take a bit of initiative to start listening have an entirely different problem: they begin seeking recordings to listen to and are overwhelmed by the seemingly limitless variety of choices available, from professional studio recordings all the way down to cell phone videos of student recitals. Not knowing where to begin, these students fail to listen at all. That, too, is unfortunate.

As a partial remedy to this, I am beginning a little series of posts entitled “Influential Recordings,” in which I will briefly introduce the reader to recordings that were particularly influential in my development as a brass player. I do not yet know how long this series will last, though I do hope to get back to the weekly blogging schedule that I have found so elusive lately. Because these were formative recordings for me, a low brass player in my early forties, most of these recordings will be somewhere in the range of 20-40 years old, and a few might be older. While recording technology has certainly improved since that time, and the overall technical quality of brass playing has, as well, these will still be quality recordings of great playing that will be worth your time. I will do my best to choose examples that are available on Spotify, YouTube, Naxos Music Library, or similar streaming services, especially since hard copies of most or all of these will no longer be obtainable. 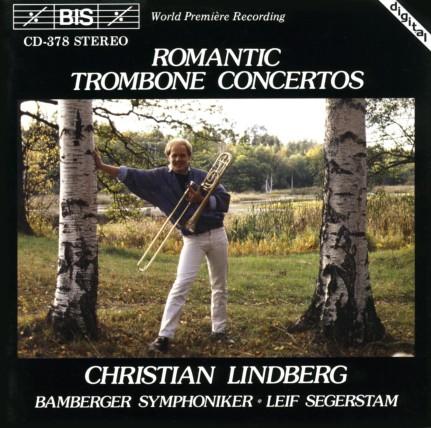 With that, let me briefly introduce Romantic Trombone Concertos. Released on the BIS label in 1988, this recording is a fairly early example of Christian Lindberg’s work, from the first decade of his career as a full-time trombone soloist and recording artist. (He has since branched out into conducting and composition.) Of the four pieces on the recording, only two are actually from the Romantic period, which musicologists usually categorize as having ended around 1900, but the others are certainly Romantic in character, though later in time.

The first two pieces (and those actually hailing from the Romantic period) are standard examination and performance works for trombonists, the Concertino, op. 4, by Ferdinand David (1810-1873) and Morceau Symphonique, op. 88, by Alexandre Guilmant (1837-1911). The Guilmant is easily approachable for high school players and in some respects the David is, as well, though it has certain expressive nuances that are more achievable by more mature trombonists. The David is commonly asked in professional orchestra auditions, as well. Lindberg’s interpretations of these two works are particularly expressive—perhaps at times “over the top” in that regard—yet I still find them to be the archetypal examples in my mind of these pieces with the notable exception of the extended cadenzas he adds to both of them. While extremely technically impressive, they are somewhat out of character for the pieces to my ears.

The third piece on the recording, the Concerto by Launy Grøndahl (1886-1960), is from 1924, and like many Nordic trombone pieces from the early twentieth century has a very Romantic character combined with a more fully developed harmonic palette. It is a more serious work than the David yet is accessible to most listeners. Lindberg takes a few liberties with octave displacements that some argue the composer would not have appreciated, but he does not add an extended cadenza.

The final piece is the Concerto, op. 81, by Gunnar de Frumerie (1908-1987), a 1984 adaptation of the composer’s cello concerto that turned out to be his final completed work. This is by far the most technically demanding piece on the program, and to my 16-year-old ears the use of a “high F” in a piece of music was particularly revelatory. Its presence is neither showy nor ostentatious; it is “just there,” and hearing a note that I had always considered to be in the realm of “stupid human trick” was just astounding, along with the entire piece.

Twenty-five years later, these pieces are no longer as earth-shattering to me as they once were. I have performed the David and part of the Grøndahl with full orchestra, in addition to performing both pieces and the Guilmant on several occasions and teaching all of them multiple times. Only the de Frumerie remains untouched by me…so far. More experience has given me a few critiques of the playing on this album. Lindberg’s vibrato is “a bit much,” and I have already mentioned his penchant for uncharacteristically showy cadenzas and liberties with octaves. These characteristics are common in much of his early work and seem to have been somewhat toned down in his later work. Still, his playing is supremely expressive throughout, is complimented ideally by the Bamberg Symphony conducted by Leif Segerstam, and remains a key part of “the sound in my head” for these pieces. One could do a lot worse.

Romantic Trombone Concertos is on Spotify and perhaps other services, as well. Give it a listen.

Micah Everett is Associate Professor of Music (Trombone/Low Brass) at the University of Mississippi, Principal Trombonist of the North Mississippi Symphony Orchestra, Tubist/Bass Trombonist of the Mississippi Brass Quintet, Bass Trombonist of the Great River Trombone Quartet, Assistant Editor (Audio/Video Reviews) for the International Trombone Association Journal, and an S.E. Shires trombone artist. He is the author of THE LOW BRASS PLAYER'S GUIDE TO DOUBLING, published by Mountain Peak Music, and released his first solo recording, STEPPING STONES FOR BASS TROMBONE, VOL. 1, on the Potenza Music label in 2015. In addition to his professional work, he maintains an avid interest in the study of the Bible and of Reformed theology. He holds doctoral and master's degrees in music from the University of North Carolina at Greensboro, a bachelor's degree in music education from Delta State University, and a certificate in systematic theology from Puritan Reformed Theological Seminary. The ideas and opinions expressed here are not necessarily shared by the employers and organizations with which the author is associated.
View all posts by Micah Everett →
This entry was posted in Alexandre Guilmant, Christian Lindberg, Digital Revolution, Ferdinand David, Gunnar de Frumerie, Influential Recordings, Launy Grøndahl, Music, Pedagogy, Recording Technology, Recordings, Teaching Low Brass, Technology, Tenor Trombone, Trombone. Bookmark the permalink.
%d bloggers like this: